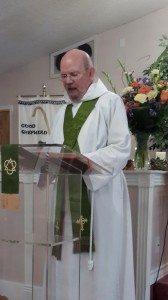 Reeves retired from St. Martin’s in 2007 after serving that congregation for 22 years. He was called to serve as vicar of St. Martin’s in 1985, and as their first rector when they became a parish in 1989.

Susan Reeves has asked that people wishing to offer a brief remembrance of Frank at the service to please email the Rev. Alan Bentrup to let him know. alan.bentrup@stmartininthefields.org

Letters and cards can be sent to:

Reeves came out of retirement to serve at the Episcopal Church of the Good Shepherd in November 2008, almost immediately after the former bishop and other leaders of the diocese left The Episcopal Church. The congregation was worshiping in the Wednesday Woman’s Club just off the square in Granbury. When they outgrew that space, they moved to their present location at the Seventh Day Adventist Church.

Reeve’s connection with Good Shepherd went back a long way. Reeves’ father, the Rev. Hume Wixom Reeves, Sr. established Good Shepherd in 1974 and served as their first vicar. Reeves’ mother and father are both buried just outside the front door of the original church.

Reeves served as sustaining priest at Good Shepherd for six and a half years, with Susan at his side.

Previous
Prayer vigil for justice and peace
Next
There really was a St. Valentine